The Fisherman - Goethe's poem as an anima-vision 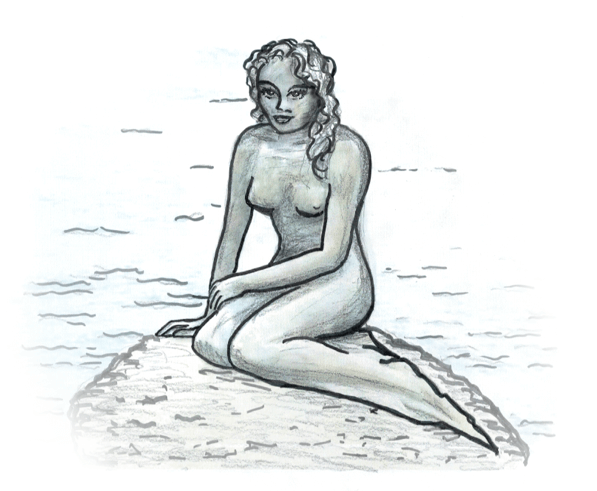 The poem "The Fisherman" by Johann Wolfgang von Goethe describes the magical appearance of a mermaid on a fisherman's jetty.

The Anima - Source of Inspiration

The feminine has always exerted a great fascination on men and especially on artists. This primal or ARCHETYPE of femininity was called ANIMA by C.G. Jung. The anima as the inner female image of the man is muse and inspiration for peak performance, whore or goddess, longing or addiction.

C.G. Jung writes about the mermaid in Goethe's poem "The Fisherman":

The mermaid is an even more instinctive precursor of a magical female being, which we call anima .[1]

The Anima in "The Fisherman" as a Mermaid

In his poem "The Fisherman" , Goethe describes an imaginary encounter with the mythical creature of the mermaid. She speaks to him, stirs something in him and finally draws him down to her in the depths.
The mermaid as an ANIMA figure is a symbol for the man's inner woman, who is not yet very developed. As a being from the WATER, she belongs to the collective unconscious and to the realm of urges . They can lead to a loss of control of the consciousness (seeThe Conscious and the Unconscious).

As a comparison: The Anima in Goethe's Faust

In contrast, Goethe, for example, thematises the attraction of the anima in his Faust in the figure of the innocent Gretchen (as a VIRGIN) and the beautiful Helena as a DIVINE. The sublime idea of femininity inspired him to write the sentence:

"The eternal feminine attracts us."

However, the fisherman is pulled down by the mermaid.

"The Fisherman" and the Longing for Motherly Primal Security

Half fish, half human, the mermaid is an archetype for primal, natural femininity. Ultimately, she speaks to the longing for the cosy primal security in the womb (water) and thus also for a state in which nothing is lacking and every desire is satisfied.

The vision of the mermaid sets the fisherman's emotions ablaze.

"The Fisherman" by Goethe - Text and Interpretations

Thewater rushed',
the water swelled,
a fisherman sat by it,

WATER: Symbol of the feminine
and the collective unconscious.
Fishermen: hunt and eat.

looked up at the fishing rod calmly,
cool to the heart.

And as he sits and listens,
the tide rises;
A wet womanrushes out of the moving water
.

She sang to him, she spoke to him:
"Why do you lure my brood
With human wit and human cunning
Up into the fires of death?

Cunning and strategy
in a deadly game.

Oh, if you knew what a little fish is like
So comfortable on the bottom,
You descended, as you are,
and would only become healthy.

The vision of a comfortable existence
in the womb of the great mother
draws down to the ground of existence
of primordial security and fullness.

Doesn't the dear sun feast,
the moon in the sea?
Doesn't her wave-breathing face
turntwice as beautiful?

Moving Merging
of male and female
(sun and moon).

Doesn't the deep sky lure you,
the damp blue?
Doesn't your own face
lure youhere in eternal dew?"

Sky/blue: the virgin and the water.
Your own face: the inner woman
(ANIMA): One's own feminine parts speak to the drive.
address the drive.

Thewater rushed, the water swelled,
Netting his naked foot;
His heart grew so longing,
As with his beloved's greeting.

Swell the overflow
of the "water of desire"..
(foot f. Sex organ [2]).
Longing for the beloved.

She spoke to him, she sang to him;
then it was done for him:
Half she pulled him, half he sank down
and was seen no more.

He lets himself be pulled down,
lets himself fall into the body
with its urges and
sinks into the unconscious.

Thoughts on Goethe's poem "The Fisherman

The poem "The Fisherman" poetically depicts a mood of a sunny Sunday afternoon.

Doing nothing and relaxed expectation are also key. The idea of not having to work (for example, to do relationship work), but to simply let "it" happen and receive is tempting. - Just like back then in mother's womb, when everything was still taken care of. Doing nothing is the lever of magic. ("It goes by itself, just speak a word.") It belongs to the realm of the unconscious and the drives.

But ultimately, the man's path means precisely this work: surrender of the body and its strength and surrender of the soul, loving and forgiving. In order to be able to walk this path of the hero, he has to break away from his mother's bond.

[S. The Way of the Man and the Masculine into the Spirit.]

The Anima
The Anima of the man, his inner woman
The Virgin
The Goddess and Her Hero King

[2] In traditions, the foot symbolises the sexual organ of the man. Here he is vulnerable (at his "Achilles tendon"). Thus the Greek word Oedipus means "swell foot". The legend tells of a man who without knowing it (in unconsciousness) killed his father and married his mother.