The liberation from the mother, materialism and consumption 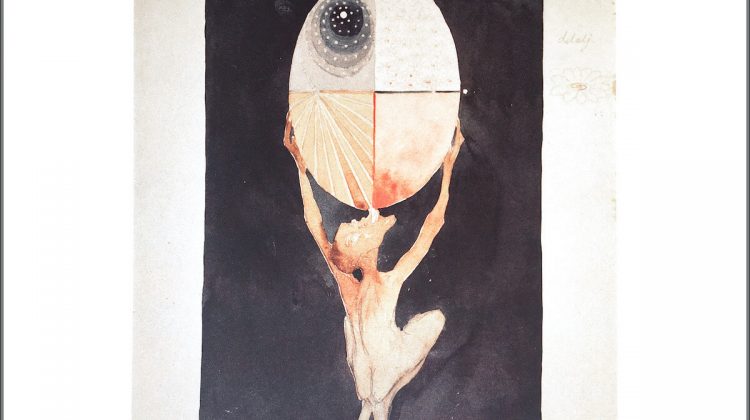 Hilma af Klint, Parcifal series, group 1, no.3 October 1916, for a description of the picture.

Liberation from the Mother and Matter

Liberation from the mother means, in a broader sense, detachment from attachment to matter in order to gain the soul and freedom of the spirit. The man is dependent on the mother from an early age. If he succeeds in freeing himself from the nourishing but also constricting security of the female, then he wins his own life and soul.

Initiation as the first step of liberation from the mother

The Franciscan priest and spiritual teacher Richard Rohr formulates in his book "From the Wild to the Wise Man".[1] on the subject of liberation from the mother:

In earlier times it was clear: the boy had to be torn out of the protective female energy and brought into a ritual space where the encounter with the male energy could become a sacred experience. The boy had to be ritually wounded and put to the test, thereby experiencing the bond with other men and finding loyalty to the values of the tribe, so that he also had something to give back.

The liberation from the mother is the indispensable prerequisite for the man to be able to set out on the "royal road", on the heroic road, at all.

(S. on The Hero's Path and Kingship in Life.)

The liberation from the mother

The man - born from a woman

It is a special circumstance that man emerged from the body of a woman. The masculine arises from the feminine, just as consciousness arose from the unconscious. Man was one with his mother in her womb. There he had everything he needed: Warmth, nourishment, security.

The mother-son and mother Trump

In the past, the birth of a son was often of special significance for women. In male-dominated societies, it gave her a better status. Moreover, she now had a trump card, namely her growing son, whom she could hold up to her dominating husband. She could mould her son from an early age. He would grow up and one day be stronger than her husband. He would even take over his throne one day. (Mythologically speaking, the "curse", namely his inescapable fate, is linked to this: the son will "kill" the father and "marry" the mother, which is expressed, for example, by King Oedipus from Greek mythology).

Dependence on the mother and the danger of abuse

A mother can thus "instil" her view of things into her son from an early age - "with his mother's milk", so to speak.
The danger of abuse for the son is that the mother takes masculine energy from him that she does not get from the father (because the relationship is in the dynamic of power). He has to give her his heart, in return she makes him her "king", gives him admiration, power, "authority" and affirmation. In the process, he does not even know that he has taken his own masculine identity and his own heart. He is now dependent on validation.

Without liberation - bondage and immaturity

Thus the "mother-son" - far too early and without having really "earned" it - has become accustomed to his "royal dignity". And in the corresponding attitude of expectation he now meets all women.

He [the son...] remains faithful to the mother, perhaps to her greatest concern (for example, when he turns out to be homosexual in her honour), and at the same time to her unconscious, mythical satisfaction. [...]
He wants to touch real things, embrace the earth and fertilise the world's field. But he only makes impatient attempts, because the secret memory that the world and happiness can also be given to us as a gift - namely by our mother - paralyses both his impetus and his endurance.

So if the man has not broken free from his mother bond, he may remain attached to a kind of childlike attitude of entitlement.

Even if there is no longer a connection to the mother, his behaviour remains the same: instead of being attached to the mother (Latin mater), he is attached to the material. His desire is directed towards consuming and gaining power through the accumulation of money and goods in order to be able to rule and take. All this ultimately serves only one purpose, namely to cover the hole in his soul and the longing for true life.

When male power is not channelled, it almost always seems destructive. Men abuse their power if they are not led down a path of powerlessness. Most men do not seem to have developed in their psyche beyond the level of a teenager.

The "Mother Witch" and "Son of a Whore

For these reasons, insulting a man's mother is the greatest shame for him. The mother as a "whore" is an allusion to the woman who has lost her own love and uses her body as a means of power to also exercise power and "take" (for example money). This also implies that she has "taken" her son's heart for herself, corrupted him and turned him into a "son of a whore".

Caricatures of such mother-sons taking pleasure in unjust rule through violence and oppression can be found in the epic "Game of Thrones"Robin Arryn has almost reached puberty, but still sucks on his mother's breast as he gleefully plunges "enemies" into the abyss. Joffrey Baratheon comes to the throne of the seven kingdoms at a young age with the help of his mother's intrigues, where he lives out his tyrannical tendencies without restraint.

"The whore"in the collective sense symbolises power through seduction and delusion, which encouragespeople to self-indulgence, confirmation-seeking and consumption (see. The whore and the beast).

Liberation - the path of love into freedom of the spirit

The path to freedom is the hero's path. Man regains his life by living love in all areas of his life. The first step is awareness that there is a higher path than materialism, namely the path of love and devotion. The second step on the path is the commitment to this path through a clear sign (s. The Second Phase of the Hero's Path - Initiation).

Along the way, the feminine parts are integrated.
With these, the hero regains his own soul and heart, which he had lost, and also the feminine side of the spirit, which is pure, unconditional love (see The Integration of the Feminine Parts).

Further texts:
Kingship in Life
Initiation, the second phase of the hero's path
The Way of the Man
Abuse - the stolen life