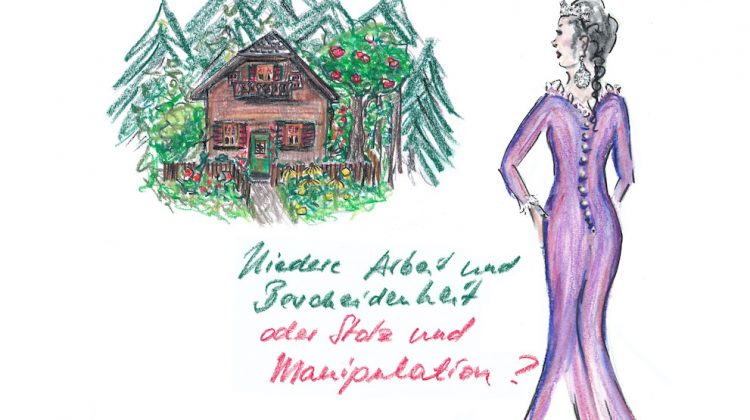 Snow White and the Terrors of the Forest

Short synopsis from the fairy tale:

Poor Snow White ran full of fear through the big forest.
Then she came to a little house. Inside, everything was neat and clean. On the table were seven place settings with prepared food. Snow White was hungry and thirsty. She ate something from the plates, then looked for a bed. The seventh one just fitted. She lay down in it, commanded herself to God and fell asleep.

The terrors of the forest

For days Liliana had hardly come out of her room. Since Johan had left, she felt she had lost her only ally. She wondered if she should run away and look for him.
But now the king, her father, who was always travelling, had announced that he was coming home.

The queen sent a maid with a dress to Liliana. The dress was long, grey and high-necked with a small white lace collar around the neck. Liliana tried to put it on as best she could with the help of the maid. Finally, her neck was sticking out of the lace collar and her arms were stuck in the narrow sleeves of the dress.
- The dress is much too tight!, cried Liliana: I can't close it!
The maid pulled tightly on the laces.
- Ow! You're hurting me!!! I can't breathe!!!, Liliana complained loudly.
The maid stopped and said:
- I am to tell them from the Queen that she will come for you when it is time..."
She quickly curtsied and disappeared.
After a while, the Queen herself entered and examined her daughter. Satisfied, she noted:
- Yes, that's good. It suits you well, this dove grey ...
She examined Liliana from all sides and stopped behind her:
- Oh, we'll have to do better than that ...
She grabbed the strings holding the corset together and pulled them with all her might.
- Mother ...!, Liliana whimpered: I can't breathe!
- Never mind!, the queen hissed, you'll get used to it. This time it won't take long. Come now!
She grabbed her by the hand and led her downstairs.

Liliana was half sick and she could hardly stand on her feet.
The queen brought her before the king:
- Your daughter!, she said dryly.
The king examined her from top to bottom and growled:
- She has grown up! - But does her dress have to be so grey?
- It's perfect for her!, the Queen replied and added: "We're still working on her manners. She won't be eating with us today!
Tersely she added:
- We can't present her like that to a groom!
She stretched and said aloud:
- It's time for the daughter to get hitched.

The king eyed his Liliana briefly. The queen looked at him challengingly and nodded meaningfully. He shrugged his shoulders and turned back to his entourage.

Liliana was glad to be back in her room and breathed a sigh of relief when the maid finally came to free her from her corset. She put on her nightgown, said her night prayer and lay down in bed.

In the middle of the night she heard heavy footsteps on the stairs. A tall man entered. It was dark, she could not make out his face. Liliana was startled. He smelled of alcohol and said:
- I like you better in your nightgown! - You heard what your mother said: It's time for you to become a real woman! I want to show you how it's done! He tampered with his clothes ...

Full of cheques, Liliana started up and looked around wildly. Her heart was pounding up to her throat. No, there was no one in her room ... She must have been dreaming. It took her a long time to fall asleep again and her sleep was restless.

That same night, the queen thought about who she could marry Liliana to. She drew up a list of seven possible candidates.

The next morning she went to Liliana to tell her that it was time to get married.
When she entered Liliana's room and saw her distraught daughter, she threw her hands over her head and exclaimed:
- My goodness! What a sight you are! - You'll never get a man like that!
- I don't want a man, Liliana replied.
Without responding, the queen replied:
- But it's time for you to get married!

She paused, then said energetically:
- Be glad that you are a princess! If you are clever, you don't have to work like the peasant women. You have to manage the household, wash, clean, cook, work hard and serve the husband. If you do it skilfully, you can get everything you want. That means you have to look good, you know? If you are beautiful and please the men, they will eat out of your hand! - But enough for today, I'll send the maid to help you fix yourself up! Your hair needs to be done and here are some clothes I've picked out for you. When you are ready, put them on and show them to me!

Comments on this interpretation: Traumatisation

The symbolism of the fairy tale (horror of the forest) says unequivocally: There is a traumatisation. Snow White as a virgin ultimately symbolises the goddess of love, whose integrity can be violated with her young, female body (see The Female Pain Body).

The Destiny of Women - Coercion and Conventions

Ultimately, a woman's destiny is to give her body for the lives of others. Coercion was and is often used for this.
Conventions set a framework that is deemed "good". They specify the appropriate match, the status, the environment, ideally a young man whose background one knows and can approve of. It seems as if the woman's lack of freedom is pre-programmed without discussion, not least because she gives away a precious commodity with her devotion: her life. The question, then, is not whether she will be subjugated, but at most how, i.e. within what framework.

Accordingly, it is also understandable that it scares her, that she rebels against it and that she prefers to choose the path of (self-)power if she can. In the past, women who chose this path were dismissed as "whores". Today there are whole cultures that call Western women whores in their freedom.

The modern story - scarcity and deprivation

The poisoned comb and the corset, the absent father

My stepmother used to watch me suspiciously. She was kind to me, but I found her ice cold. She had father completely under control, he didn't dare say anything against her. Besides, she was always criticising me: my style of dress, my hairstyle, my manners ... Then she tried again to get me on her side by buying me clothes, expensive clothes that made me look like her. I couldn't wear them!

The terrors of the forest

I felt with every fibre of my body that I was a thorn in her side. The decision matured in me: I wanted to leave as soon as I could! I'd rather live a simple life than live under the same roof as this woman any longer. I scraped together my savings and boarded a train.

The Dwarf House, Dream and Nightmare

In another area, I first took a menial job to earn money. Since I was pretty and had a quick perception, I also got better work quickly. I noticed that men paid attention to me and I put on a hard shell. There was no way I was going to be like Barbara! I had several relationships, six men, until I finally got stuck with the seventh, Matthias.

In the bed of the seventh dwarf

Matthias was good to me. We got married and moved into a little house. I became pregnant and gave birth to a daughter: Miriam. Two more sons followed, Peter and Paul. We didn't have much money and worked hard. 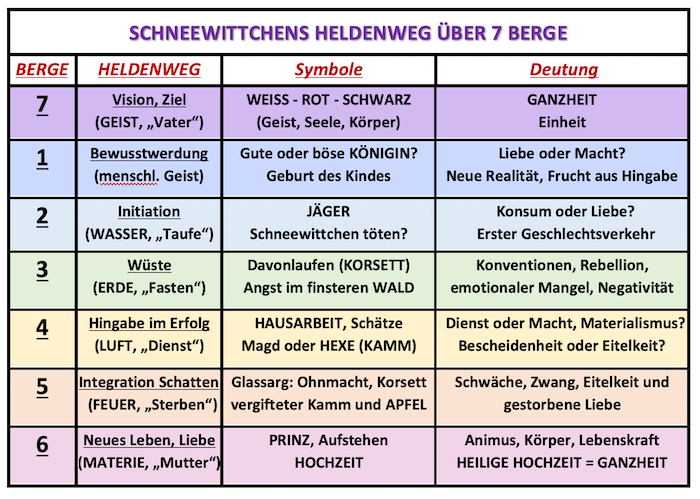 The third phase of the Hero's Path: Desert

Remaining faithful - despite fear and terror in the forest

The fairy tale tells the girl: Even when difficult times come, hang in there! Better a life of modesty and small security than vanity and conventions. They are poison for you! They kill love.

The forest, symbol of the collective unconscious in the realm of the body

In the collective unconscious there is knowledge of the millennia of oppression and exploitation of women and especially of their bodies. As long as this reality is not addressed but talked down, it has power over women from the unconscious and leads to fears.

So the princess in our story is also initially overwhelmed by what growing up entails and powerlessly lets it pass her by.

Lilian suffers from a different kind of conventions and lack of freedom. As a modern woman, however, she has more opportunities to follow her inner vision of a fulfilled life and realise her dream of freedom. Faithfully, she also bears the consequences of her decision by doing good work, serving her family , accepting her fate and making the best of it (see also Frau Holle).

We continue with:
At the Seven Dwarfs

Further reading:
The woman's body of pain
Abuse - the stolen life
The Seven - Wholeness of Earthly Reality
The Third Phase of the Hero's Path - Desert
The Heroic Way of the Woman