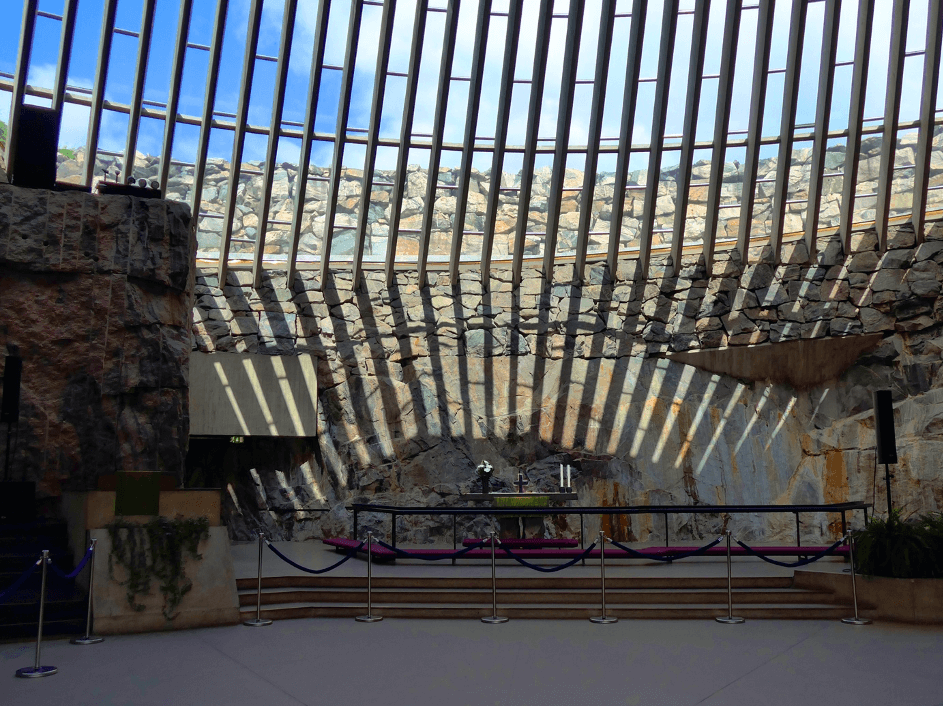 My husband and I were in Helsinki for an official engagement. "A little sight-seeing is part of the game", we said to ourselves and consulted a city guide who suggested the Rock Church among the 10 must-sees.

We got there on foot. Indeed, there was a large, mighty rock in front of us. The fine green copper roof, which rested on large, piled-up stone blocks, was barely visible from below. We reached the entrance, a plain opening, as if carved in stone. We went in and found ourselves in a round room that looked like a cave, except that you could see the sky and the clouds through a round band of light under the ceiling. The light penetrated the room from all sides, between the beams of the round ceiling, which thus seemed to float lightly above the room, which looked as if it had been carved in stone.

To our astonishment, there were only a few people in the room. And the organ played beautiful music by a Nordic composer. The mood was reverent, even solemn.

Suddenly the light in the room changed.
The wind had torn open the cloud cover in the sky above the church and the sun shone into the room. The shadow of the steel beams of the roof cast rays on the stone wall, just above the altar, so that it looked as if powerful rays were emanating from it (see photo).
It was an overwhelming experience, which made something of the invisible reality in our material existence visible. Not least thanks to the master hand of the architect, who must have planned the church in such a way that this event occurred at the highest position of the sun of the year.

The symbols of the image

Radiant Inanna - Queen of Heaven and Earth
Stele of Ur-Nammu: Kingship
Burney Relief - Lilith or the Queen of the Night

My encounter with Hilma af Klint
The three altarpieces - the path to wholeness
Altar 1 - from matter into spirit
Altar 2 - from spirit into matter
Altar 3 - Wholeness and the Self
Evolution No 4 - Man and Woman
Evolution No 12 - Couple Dynamics 1
Evolution No 13 - Couple Dynamics 2
Swan No. 17 - the fire dynamic
Parcifal Series, Group 1, No. 3
Dove No. 8 - The Dragon Slayer
Fire and ice

Michelangelo: The Creation of Adam
The Pregnant Virgin of Remedios (Cuba)
Igor Mitoraj: two sons of the father
Garbatis Medusa and #MeToo
Elisabeth Baldenweg - Colour as a matter of the heart