The Dark Fairy as Goddess of Fate (Disney's Maleficent)

Angelina Jolie as the Dark Fairy in the Disney adaptation "Maleficent 2 - The Powers That Be".

The dark fairy as a deity of fate

The dark fairy as the good fairy?

In the Disney productions the dark fairy is called Maleficent (from Latin male ficent meaning "doing evil"). The films starring Angelina Jolie are an interpretation of the fairy tale Sleeping Beauty and make an interesting statement. The dark fairy is portrayed as the "good fairy" who protects the princess and saves her from misfortune, even rescuing her from her deathly sleep.

How does this reversal come about and what does it mean?

The deeper meaning behind this is that precisely those fateful circumstances that a person perceives as evil or unjust ultimately help him to develop his strengths. They bring their shadows to light, which are integrated in the power of love and transformed into resources, thus contributing to healing and wholeness.

The dark fairy as a deity of fate

From virgin to deity of fate

Fairies have supernatural powers. They can "cast spells", that is, they can move matter. As a winged being, Maleficent is a spiritual figure, a "goddess" and also an anima figure. Once she was "goddess of the sky", namely VIRGIN. Her way leads her down to earth, where she has to go on foot, because her wings were cut off. At last she regains her spiritual power. As queen of the underworld she is an image for the Mother Goddess in her third aspect as a deity of destiny (see Female Wholeness - the Goddess, White / Red / Black) .

In life, man receives good gifts and resources from destiny as the Great Mother, which enable him to reach his goal. However, he also has to face trials and overcomes obstacles by bringing love to bear.

Maleficent - the fate of the princess

Thus the fate of the young princess is also linked to Maleficent. The curse means that she will meet the same fate as Maleficent, which and in general befalls countless women. It is the plight of many women who are abused and hurt by unlawful and loveless sexual intercourse. (S. The poisoned apple - abuse as a collective reality).

The death and resurrection of love

Because love can die in the process, she is in danger of falling prey to power.
But Maleficent learns to love Aurora and saves her from this fate with all her strength and power. This means nothing other than that the strong woman learns to love herself and to integrate her weaknesses. Thus the VIRGIN in her, the pure love, rises again (symbolised by the princess).

The dark fairy and her wings: power in the realm of the spirit 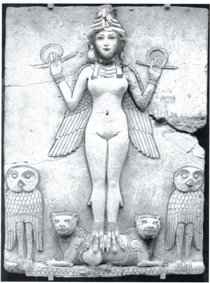 The wings signify power in the realm of the spirit. Maleficent moves safely and strongly in it until her lover Stefan betrays her and cuts off her wings. This means: her spiritual power, love, has died.
As a winged being and spiritual figure, Maleficent is a "goddess" and thus also an anima figure. Once she was "goddess of heaven", namely VIRGIN. With consummated sexual intercourse she becomes MOTHER and Queen of the Earth. This is represented in Maleficent 1 by the fact that she now has to walk on earth instead of flying through the air.

As GREAT MOTHER, grandmother, she becomes the queen of the underworld. In negative guise, the wounded woman who exercises power in the realm of the spirit through eroticism and manipulation appears as a witch or harpy. Thus she is depicted in the Burney relief depicted with wings and claws of a bird of prey (illustration, Babylon, c. 1800 B.C.). Her mythological "mother," Lilith, already appears in Sumerian lore. Also Isisthe Egyptian goddess of love, is also depicted with wings or as a falcon.

The horns of the dark fairy: female emotional power 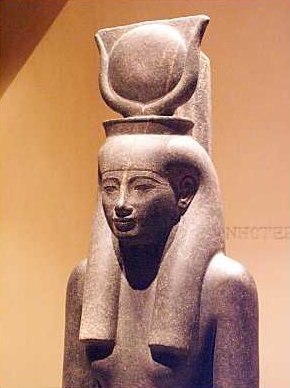 The Goddess of the Underworld

Horns and the feminine belong together. Even Hathor, the Egyptian goddess of the underworld, wears a crown of horns (which encloses the solar disc, image Wikipedia).
The centre of female power and strength is in the woman's abdomen, because this is where new life grows.
Interestingly, the uterus and fallopian tubes resemble the shape of an animal's head with horns:

The Dance Around the Golden Calf

This also explains the bull cult and the dance around the Golden Calf (see The Bull as a Feminine Symbol and The Exodus from Egypt). It is not so much a fertility cult, but rather expresses idolatrous worship of the feminine and its life-giving power. This also includes the worship of the deity of fate in the underworld, which later developed into a cult of the dead with the defamation of strong femininity.

Even the ancient Greeks saw the seat of a woman's hysteria in her uterus (Greek: hysterix) and surgically removed it. The bullfight is a vivid model for Negative couple dynamics. The first bullfight is described in the Gilgamesh epic. After Gilgamesh, the goddess's lover, devalues her as a whore, she brings the sky bull down to earth in anger. But Gilgamesh and his crony kill it.

Since then (for a good 3000 years), womanhood seething with rage has been scapegoated and strong womanhood demonised.

All this is the deeper meaning of Maleficent's horns.

The battle of the sexes and the curse

The Dark Fairy and the Curse as Human Destiny

The justified wrath of the "dark fairy

The dark fairy was not invited to the feast and is therefore angry, every child understands that. But this is only the superficial explanation. There is much more behind it, as expressed in the two Disney adaptations "Maleficent" with Angelina Jolie.

Abuse of women as a collective reality

The fact that Maleficent was abused and hurt by her human lover is the reason why she is "evil". She represents the curse as a collective reality.

Abuse was already in the Sumerian mythology (around 3000 BC) the theme. It tells that The Tree of Life of the Goddess of Love was occupied by dark beings and therefore was cut down by Gilgamesh.

The Curse from the Shadow and the Dark Fairy

The collective reality of abuse and oppression of women has persisted so long and stubbornly precisely because it was repressed and denied. But it was there nonetheless, acting as a curse from the shadows to ever new fateful entanglements in the power game between man and woman. (See Introduction to the Babylonian Epic of Gilgamesh and Dark Secrets as a Curse).

The great feminine, life and destiny

Maleficent with her magic and strength also symbolises as a powerful fairy this collective aspect of the shadow and the power which is locked away in it together with pain and anger (see The Great Feminine in the Underworld).

Wholeness through integration of the shadows

It is initially Aurora's innocent love that reawakens Maleficent's love. She trusts her and sees Maleficent as her "fairy godmother".

Maleficent symbolises both: the curse and also the strength of the young woman who fights for the resurrection of mortally wounded love. Thus she (2) initially also wants to prevent the wedding between Aurora and the prince. The further course of the film shows that this also has its good reasons: There is a lot going wrong in the prince's royal house, and so the prince is not really free to love Aurora and give himself to her.

The shadows come to light

First the shadows must come to light. In Maleficent 2 they are represented by a whole army of dark fairies who take Maleficent, who has been injured by the evil queen, into their home in the underworld. They now show themselves, show their colours and fight together with Maleficent against the unjust rule of power (see The Integration of the Shadow).

In the end, freedom is won for the princess and the fairy kingdom and the victory of love is sealed through the wedding. It symbolises the successful integration of the unconscious into consciousness (see The Sacred Wedding).

The Conscious and the Unconscious: King and Queen
The Holy Wedding
Feminine Wholeness - the Goddess, White / Red / Black)
The Anima as Goddess
The Virgin